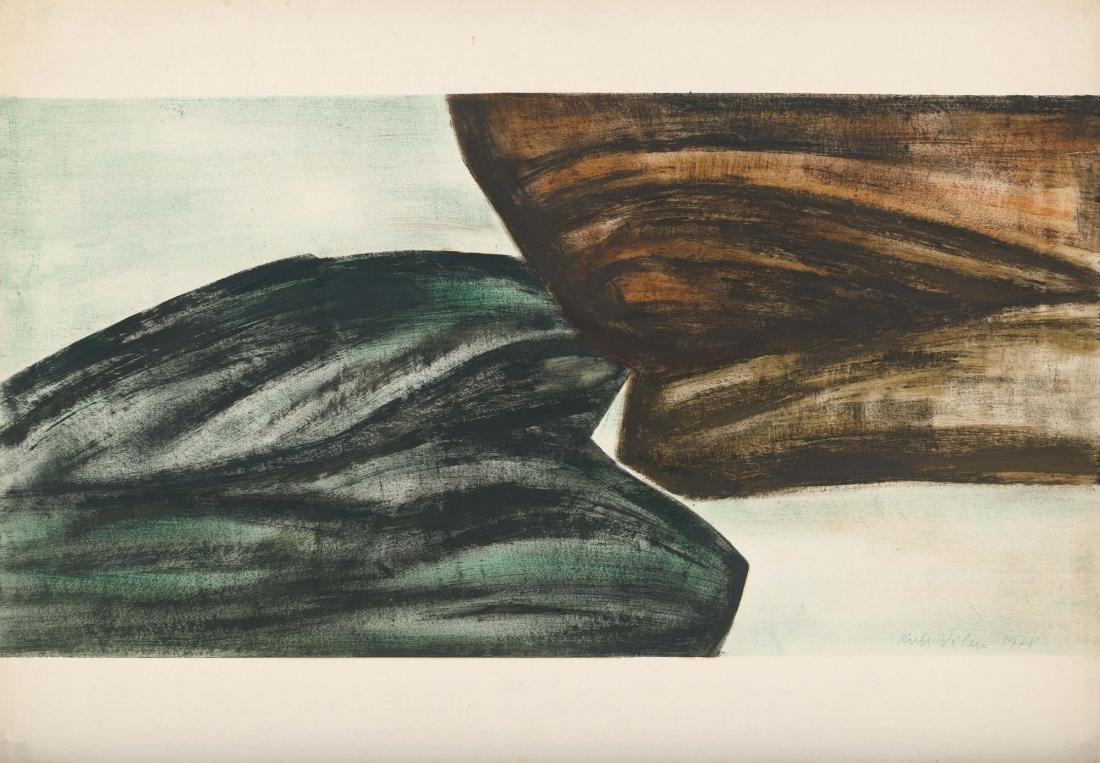 This painting displays the typical artistic signature of Květa Valová, who (unlike her sister Jitka) worked with strong outlines enclosing saturated inner spaces. Weighed down by living under a long-entrenched totalitarian regime, in the late 1970s and 80s Květa Válová repeatedly depicted motifs of stones and boulders to express the notions of burden, friction and pressure – as in Lone Rock (1983), Collision (1981–1982), Touching Stones (1984), or Stone Enclosure (1982). Whereas all these works feature organic, rounded shapes, the 1978 painting Stones comes closer to the forms of crystalline geometry. However, it is typical of Valová’s work in its uncompromising monumentality and expressive compactness.

(1922, Kladno – 1998, Kladno) Painter, graphic artist. Her work is closely connected with the work of her twin sister Jitka Valová. From 1945 to 1950 Květa Valová studied under Professor Emil Filla at the Prague Academy of Arts, Architecture and Design. She was a member of the Trasa 54 (“Route 54”) group. Along with her sister Jitka Valová, plus Adriena Šimotová, Alena Kučerová and other artists, she ranked among the foremost exponents of the New Figuration movement. Květa Valová spent her entire life living with her sister in the working-class town of Kladno, which served as an important source of inspiration for her. In her early work, she briefly produced structural paintings before turning to the figure as the core bearer of essential meanings. Her experience of informel art and its formal techniques was reflected in her later work, such as her assemblages of sand and other non-artistic materials on the surface of images. In the 1950s she created a large set of robust figures depicting manual workers at the local ironworks. Like her sister Jitka, her main technique was drawing, though the two artists’ style was entirely different: Květa depicted solid, static and robust figures which accentuated the motif of the burden of human fate. She represented existential issues in the form of boulders, rocks and stones. Along with her sister Jitka, she exhibited numerous times in her home country and abroad. However, she died before the last major retrospective exhibition of her work could be held (in 2000). Her works form part of many Czech and international collections.