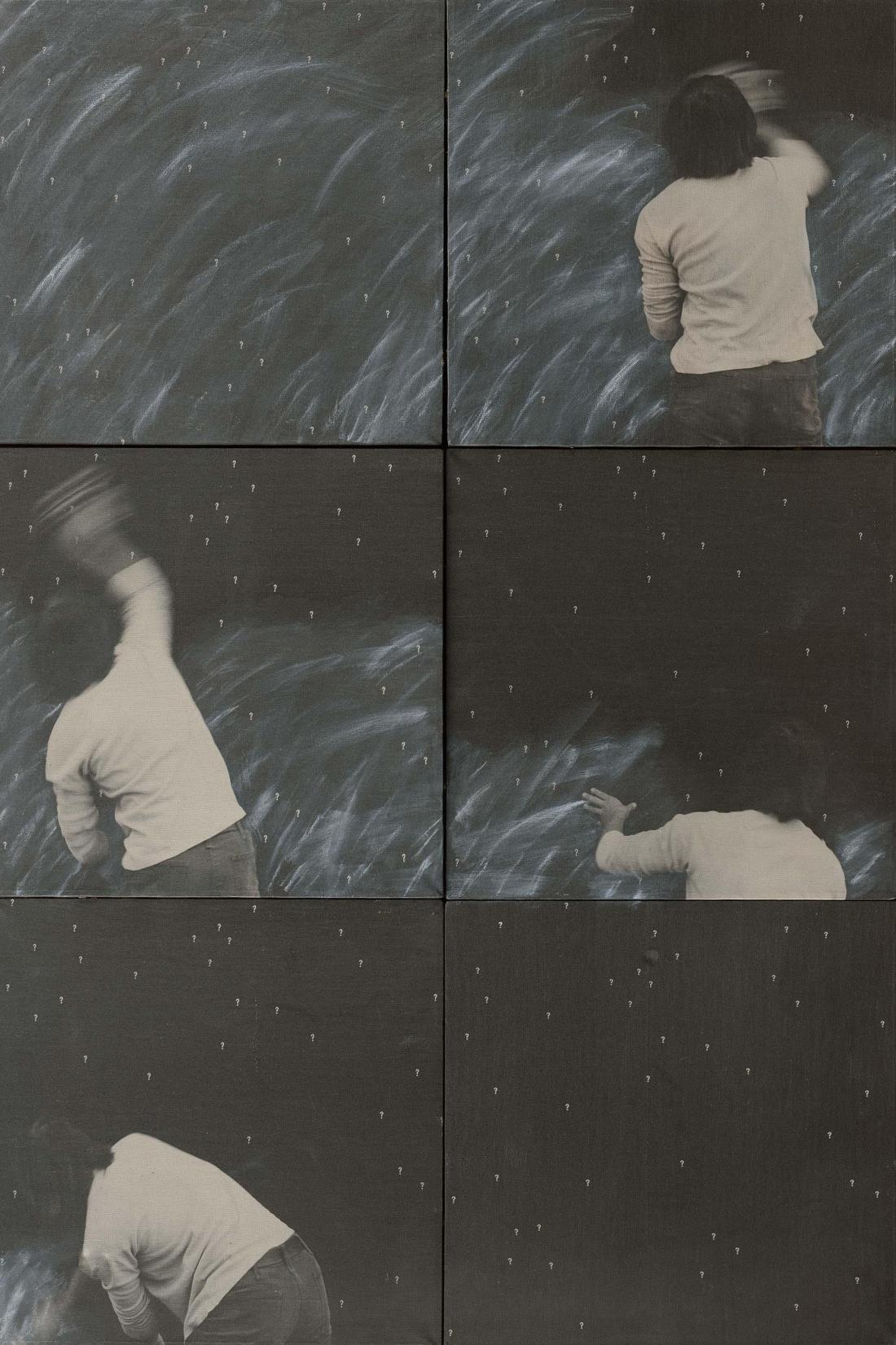 This work is typical not only of Dezider Tóth’s production, but also of the entire Czechoslovak art scene during the 1970s and 80s. The unofficial art scene was characterized by a strong focus on action and performative art, whose processual aspects were captured and recorded. Koan II is a photographic record of the wiping-away of chalk-written messages and chalk drawings on boards prepared by the artist; these boards featured numerous question marks executed in indelible oil paint. This structure symbolized a starry sky. The chalk messages and drawings were created spontaneously by visitors who came to the artist’s home to attend unofficial private exhibitions during the 1970s. Tóth then used a wet sponge to wipe away this visual “noise”, thus emphasizing the essence – emptiness, or a background of potentiality. In the artist’s words, “the black background became deeper, the white question marks became more clearly visible” (from a letter to Helena Markusková, 6 October 2002).

1947, Výčapy-Opatovce) Conceptual artist, painter, graphic artist, performer, installation artist. Tóth ranks among the most prominent Slovak conceptual artists. Since 1997 he has used the synonym “Monogramista T. D.”. From 1966 to 1972 he studied at the painting studio of Bratislava’s Academy of Fine Arts (under Professor Peter Matejka). From 1991 to 2015 he taught at his alma mater in Bratislava, and in 2002 he was appointed professor of intermedia art at Prague’s Academy of Fine Arts. Besides his work as a painter, since the 1960s Tóth has explored the possibilities of theatre, contemporary film and literature. In 1966 he was a co-founder of the POMIMO theatre, where he also performed; this influenced his tendencies towards performative art. In the second half of the 1960s Tóth was influenced by the artists Jan Steklík and Karel Nepraš and their “School for Pure Humour Without Wit”; he created an extensive series comprising dozens of drawings that combined textual elements with anecdotal and absurdist aspects. In 1970 he took part in Rudolf Sikora’s first “open studio”. Tóth’s work features numerous textual elements, as well as taking a conceptual approach to musical scores and natural motifs. In the 1980s he began to apply his conceptual approach to objects and handcrafted books. In 1991 he moved into teaching, heading the so-called “Non-Studio” at his alma mater in Bratislava. He was awarded the Dominik Tatarka Prize for his autobiography I’m not an author, I’m a metaphor (2011).