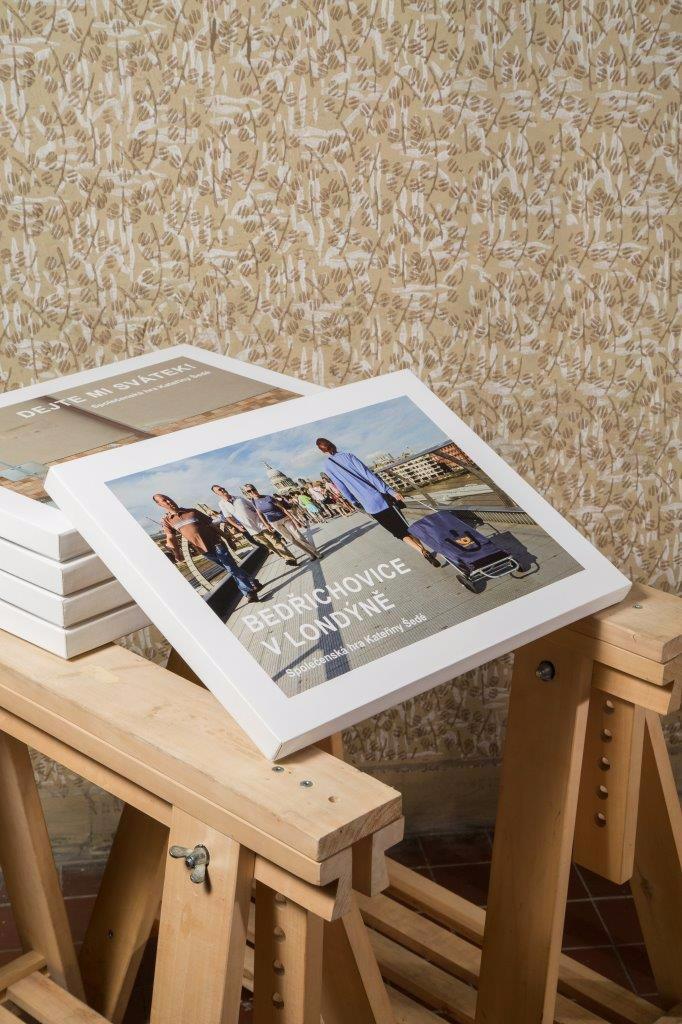 5 board games by Kateřina Šedá, printed paper boxes. Each of the games is based on its position in a chronological series of images of various events as part of this five-year project

This set of five games was created as part of the five-year Bedřichovice upon Thames project which involved 80 people from the ordinary Moravian village of Bedřichovice in a range of multi-layered activities; the project not only brought the community together, but also gave rise to a range of outputs such as a new village festival, the renaming of the village as Bedřichovice upon Thames (and the creation of English versions of its street names), and the creation of a previously lacking village square incorporating typical features of London public spaces – red phone boxes and double-decker buses. These are the physical imprints of a project dating back to 2011, when Kateřina Šedá was approached by the Tate Modern gallery in London to create a novel format for reviving social ties and community activities in the village. The project emerged as Šedá’s direct response to her observation that the inhabitants of the village lived largely isolated lives, lacking mutual interaction with and knowledge of each other. As part of a happening at the Tate Modern, 80 people from Bedřichovice were invited to travel to the gallery in London, where they re-enacted a normal Saturday just as they would spend it in their home village. By decontextualizing their activities and situating them in a neutral environment, Šedá helped to strengthen community ties – resulting in a range of community activities that emerged from the project.

(1977, Brno) Socially engaged artist. From 1999 to 2005 she studied under Vladimír Kokolia at the Academy of Fine Arts in Prague. She has won numerous awards in the Czech Republic and abroad, including the Jindřich Chalupecký Prize, the Most Beautiful Book of the Year, the TAKU Production Prize (Finland), the Contemporary Art Society Award (UK), the Fluxus Award (Germany) and more. Kateřina Šedá’s work is best-known outside the Czech Republic. She has had residencies at IHME in Helsinki, CNEAI in Paris, SF MOMA in San Francisco, the Tate Modern in London, and many more. She has exhibited at MMOMA in Moscow (2016), the Venice Biennale (2013), the Mori Art Museum in Tokyo (2010), the New Museum (2009), Manifesta 7 in Bolzano (2008), the 5th Berlin Biennale (2008), the Renaissance Society in Chicago (2008), and Documenta 12 in Kassel (2007). She has published over 30 books mapping her work. In 2020 the Gallery of Fine Arts in Ostrava published the anthology Profession: Šedá, a retrospective of all her projects to date. The epicentre of Kateřina Šedá’s activities lies in her work with individuals or larger groups (such as a family or even an entire village). Her works are not only performative commentaries on events; they are events in their own right. Her projects contextualize issues in contemporary society such as isolation, a lack of dialogue, and unwillingness to communicate. They are not intended solely as reflections of these issues; they aim to achieve change. Working in situ within cities or villages, Šedá offers the local community an opportunity to play an active role and to break down interpersonal barriers. Only then (and not always) are these projects transferred to institutional forms such as publications, exhibitions or performances.