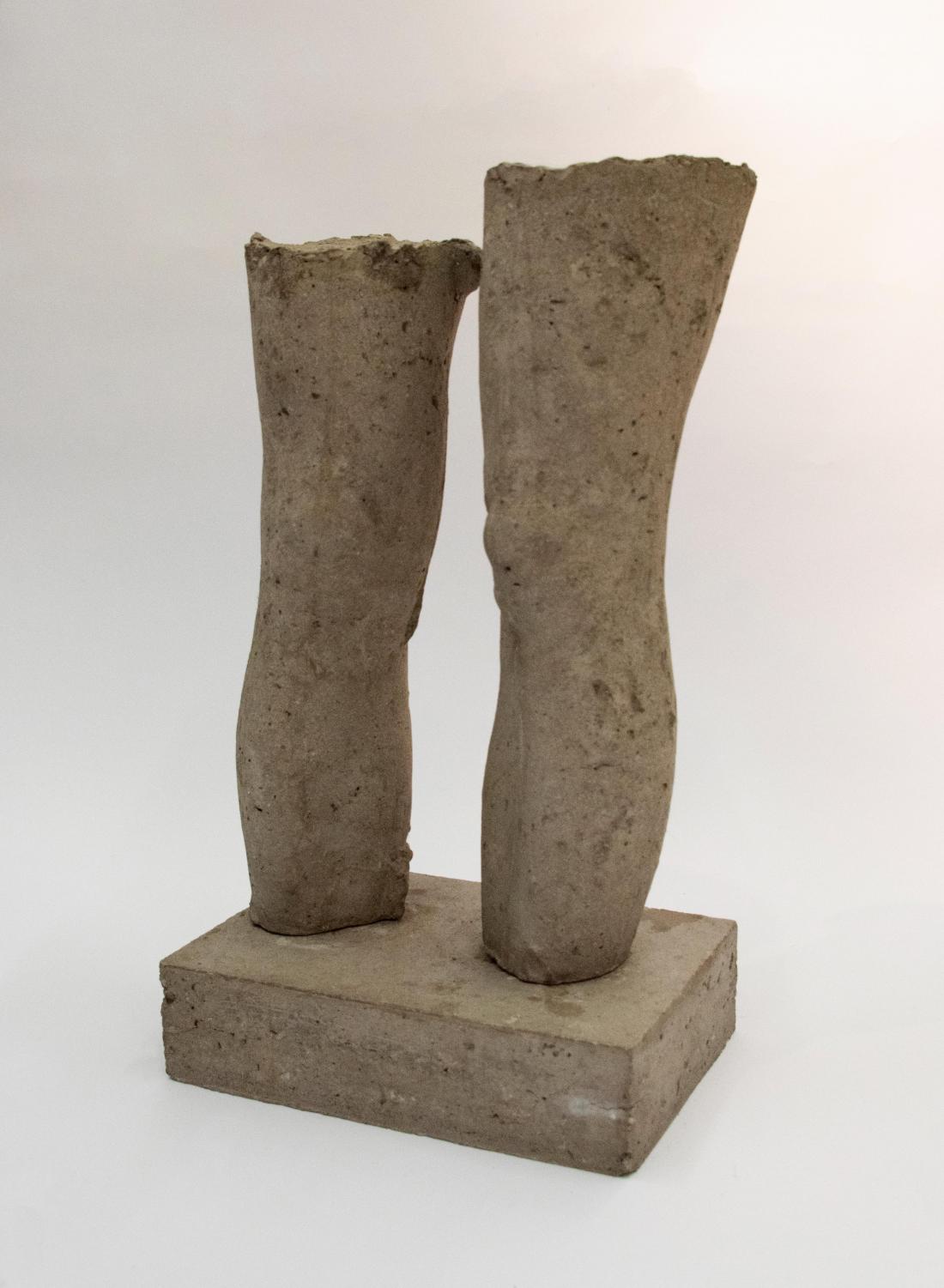 This work is typical of one strand in Kmentová’s work, featuring casts of authentic fragments of living figures. She used casts of her own legs or those of her son, imprints or casts of fingers, and even an imprint of her own body in a crouching position. These casts of authentic parts of human bodies represented an important conceptual shift in Kmentová’s oeuvre. Craftsmanship in the original sense of the word is pushed somewhat to the margins, overshadowed by the use (and effect) of authentic casts and imprints. Legs – which can be considered a symbol of motion and, by extension, of freedom – are decontextualized from the body as a complete entity, thus emphasizing their symbolic meanings. Fragmentation and fixation represent a clear statement on and critique of the paralyzing effect of totalitarianism.

(1928, Praha – 1980, Praha) Sculptor. In 1946 she was admitted to the Prague Academy of Arts, Architecture and Design, where she initially studied jewellery-making before shifting her focus to sculpture (at Professor Josef Wagner’s studio). She graduated in 1951. In 1957 she became a member of the Trasa 54 (“Route 54”) group. Following the 1968 Warsaw Pact invasion of Czechoslovakia she was only permitted to exhibit sporadically, at small regional galleries. In 1976 she was awarded the (private) Jiří Kolář Prize. After graduating from the Academy, Kmentová sought inspiration in the work of European modernist sculptors (including Lynn Chadwick, Kenneth Armitage, Henry Moore and Pablo Picasso); this inspiration was reflected in her simplified stylization of figures and her emphasis on gestures and shape-based compositions at the expense of details. Her largest surviving work, Woman in the Sun (1958), clearly shows the influence of Fernand Léger. Around 1963, her collaboration with architects led her to gradually move away from figural depictions and focus instead on abstract signs and large-scale reliefs. Kmentová’s works from this period are characterized by a powerful existential subtext. She produced cast reliefs using the textures and shapes of wood fragments to create abstract assemblages in concrete. After participating at the 1966 sculpture symposium in St. Margarethen (Austria), she began making large landscapes using the imprints of rounded stones to symbolize seeds and eggs. Throughout her life she had an intense connection with nature and landscapes, a fascination that was expressed in her typical works featuring imprints in plaster – soles, lips, hands and fingers. Abstract landscapes thus became landscapes of the human body. Kmentová’s reliefs featured words expressing urgency (“No”, “Why”, “I”) alongside fallen leaves or apples, imprints of fingers in the form of fragments, configured into assemblages on the surface, and again elements of the human body – feet imprisoned in the earth, exposed ribs, or the artist’s own crouching body as a plaster imprint.