This painting has an ambivalent dimension. The bright, spectacular colours contrast with the content of the images. The rooks – who in winter migrate from north-eastern Europe and inhabit the Czech landscape for a while – can be viewed as a natural phenomenon that is repeated cyclically, yet which always appears to us as something invasive, foreign. Bednář situates the flock of rooks in a field, near the pylon of a power line and a bizarre billboard. The billboards and steel pylons represent a severe spatial disruption of the arable land. At the end of the 20th century, the field – which since ancient times has been a symbol of harvest, fertility and thus life – is viewed through the lens of commercial interests, and its original value as a provider of sustenance has been transformed as it has become a zone of speculative interests. The rooks, symbolizing invasiveness, are situated close to a billboard; rooks typically gather and cluster together, and thus they can be seen as multipliers of civilization’s invasion of the landscape. In the centre of the billboard are further iconographic elements that encourage us to read the painting as a critique of consumerist society: the logo of a phone company is interpreted as a monstrance, and at the right there is a figure alluding to Plato’s cave.

(1969, Opava) Painter. He studied under Daniel Balabán at the University of Ostrava’s Art Department (1999–2005). He lives and works in Ostrava. His works are represented in the collection of the National Gallery in Prague and the Richard Adam collection. He has been exhibiting (both solo and as part of group exhibitions) since 2000. Bednář’s works explore a depersonalized world full of dark recesses. Sometimes this darkness is projected into nightmarish urban scenery, sometimes into raw landscapes captured in wild brushstrokes and expressive colours. Bednář often works with figures, though these often become deformed and degraded. One of the most characteristic aspects of Bednář’s imagination is the notion of weight and heavy burdens. In his canvases he does not restrict himself to painting; sometimes he adds textual elements whose form resembles that of graffiti tags, and at other times materials of various origin are assembled and attached to the surface of the painting. Bednář’s works are imbued with a subliminal critique of social or societal phenomena, such as the excess of masculine or feminine energy in relation to the opposite sex. His landscapes include depictive elements that we could perceive as clues to reading the works, yet they immediately disintegrate and become lost among the indeterminate meanings of the compositional entity. And so Bednář’s paintings confront us with a visual mystery: our eyes are drawn into them readily, but deciphering the images represents a greater challenge. 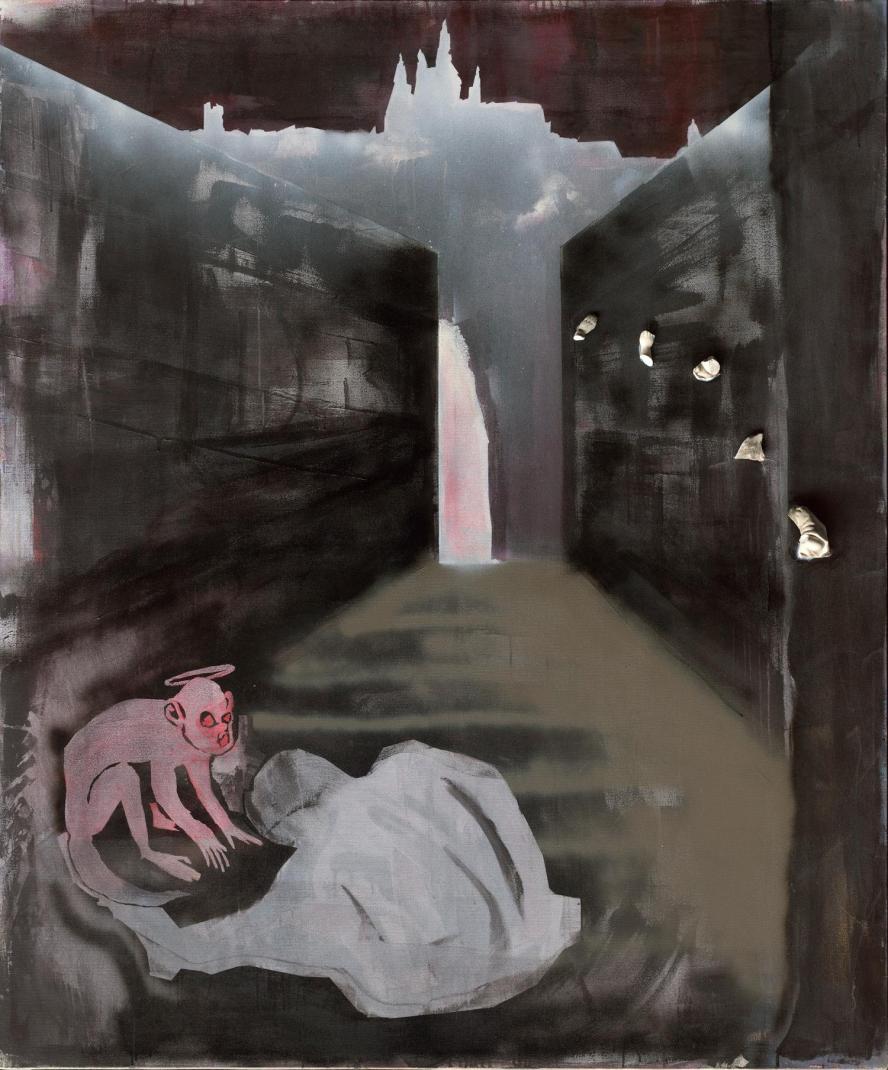