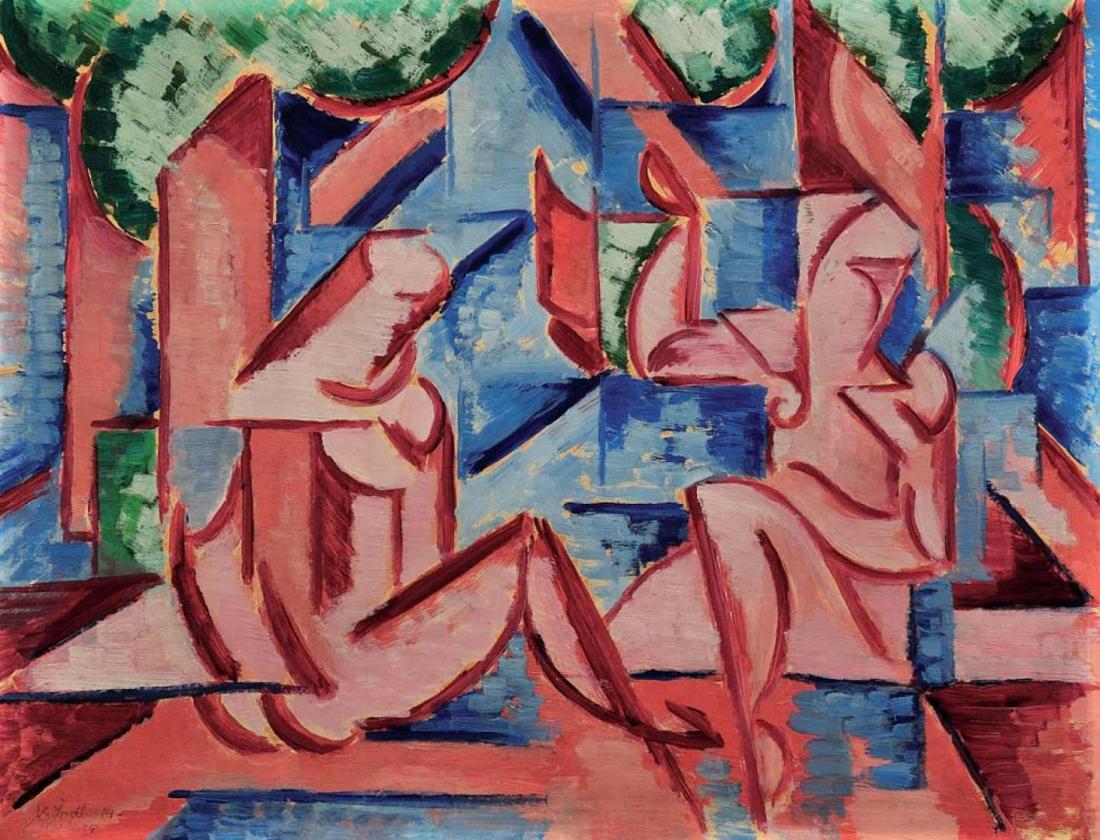 Bathing is a frequent theme in Cubism. Paul Cézanne used it as a subject and his paintings with large groups of figures at the waterside foreshadowed the figural compositions of Pablo Picasso, André Derain and Georges Braque. In common with Emil Filla, Bohumil Kubišta, Antonín Procházka, Josef Čapek and Vincenc Beneš, Špála made use of the opportunity to depict the naked human figure in a natural setting. Špála’s Two Women at the Waterside is rightly considered an inestimable artistic treasure. Of modest dimensions, it used only three colours. Together with red symbolising the scorching heat of summer, tanned bodies and yearning, the artist opted for a complementary blue and green setting. This evokes cool water, the summer sky and green trees. In accordance with Cubist principles the picture is composed almost entirely of straight lines, sharp angles and a precise assembly of artistic elements. The fact that they are arranged as a mosaic of geometric shapes in a regular network, forces one to reflect on the structure of the painting. Cool rationality is balanced by the energy of the conflicting colours suggesting the sparkling water and the comforting shade of the trees in summer.

Špála studied in Prague at the School of Applied Art and at the Academy of Visual Arts (1903−1908). Although he did not complete his course at the Academy, this magician of colour and devotee of order was awarded the title of National Artist a year before his death. He exhibited with the Tvrdošíjní ( The Stubborn) group, and was a member of the Mánes artist’s association. Špála is known chiefly as the painter of a blue and red bouquet of peonies in a white jug, but he also gained a reputation with his landscapes along Cubist lines, his figural compositions and his portraits.