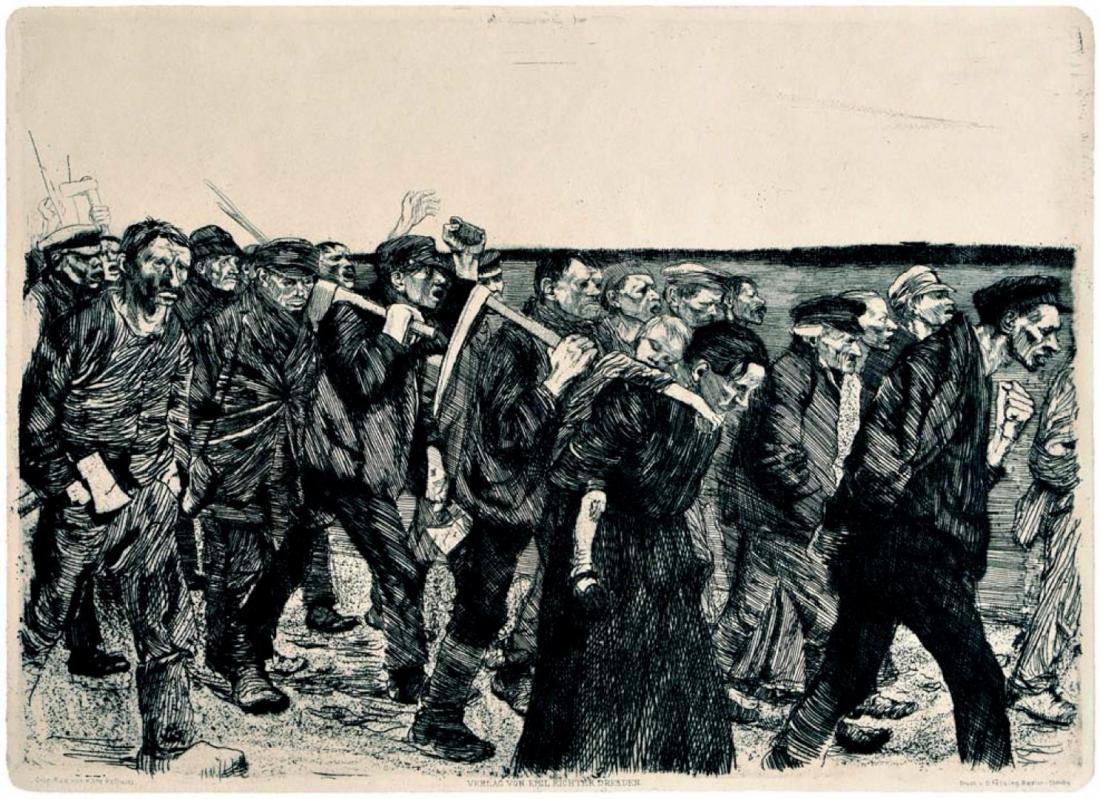 Käthe Kollwitz / March of the Weavers

Käthe Kollwitz / March of the Weavers

One of her key works, the cycle Weavers (1894−1897) —— inspired by a play by Gerhard Hauptmann about an unsuccessful revolt by Silesian weavers in 1842 —— in which she eloquently expresses the suffering, hopes, courage and eventual failure. During the years 1902−1908 she created the cycle Peasant War. Her etching entitled After the Battle, in which a mother looks for her son among the dead by night, would be chillingly prophetic of her own future —— her son Peter was killed in October 1914. In memory of her son and the other fallen she created the sculpture Mourning Parents that became a timeless concept for war memorials. In the years 1922−1923 she reacted to her wartime experience with several cycles that dealt with the death of the volunteers and the fate of the mothers and widows. When Adolf Hitler came to power she was forced to leave the Academy and her works were removed from museums and galleries.

Kollwitz was a German printmaker and sculptor, whose given name was Käthe Schmidt. She grew up influenced by the religious views of her grandfather and the radical socialism of her father. In 1885 she enrolled in an art school in Berlin and from 1888 she studied in Munich. At the age of seventeen she met the medical student Karl Kollwitz, whom she married in 1891. After their marriage they moved to Berlin into an apartment that was destroyed during bombing raids in 1943 along with much of the artist’s work. Her husband’s work as a doctor in a working-class area was a source of inspiration for her. Kollwitz often spoke about it and she was captivated by the character of the people, their lives and their courage to battle with their harsh living conditions, not to mention their strange beauty. Social themes became the mainstay of her oeuvre, which reflects the lot of proletarian women, such as in her work Woman with a Dead Child (1903).