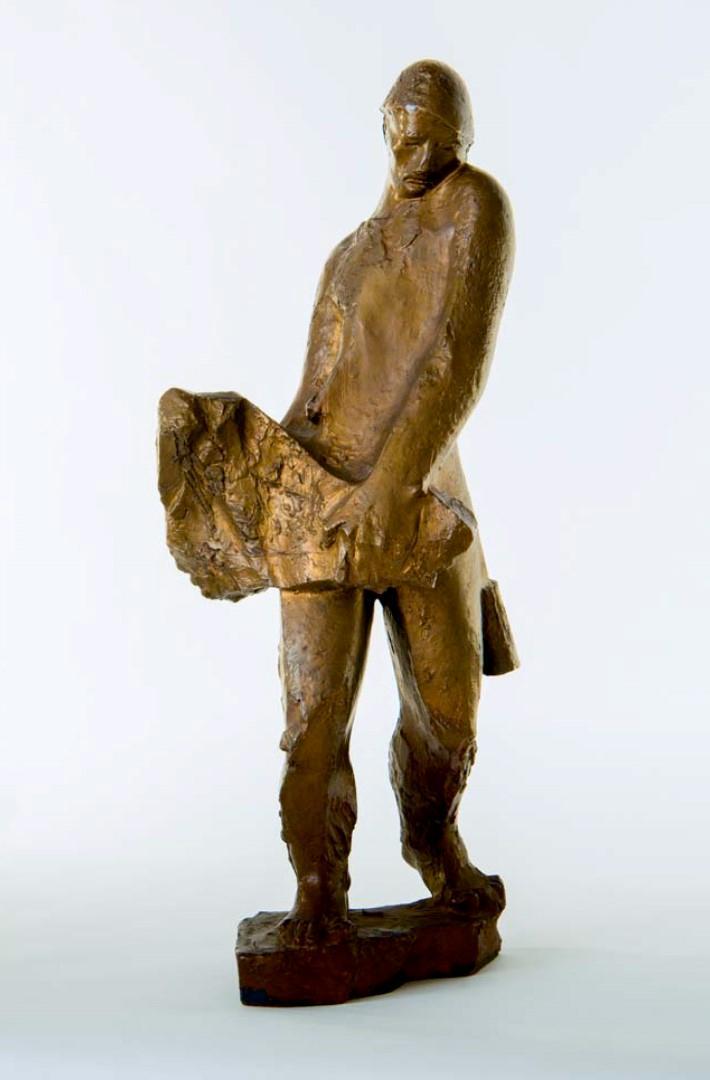 Jindřich Wielgus / Miner with a Block

Jindřich Wielgus / Miner with a Block

Among the most significant of such works is Miner with a Block (1945). The bronze study and the finished work were made at a time when there was no longer any demand for works on the theme of work, but it is a study of a high standard by a sculptor who was well acquainted with the life of workers. The figure of a man in contrapposto carrying a heavy load is depicted minimalistically, without narrativity and unnecessary naturalism. Maybe that is precisely why it so perfectly captures the human condition. The work intuitively reflects the spiritual dimension and man’s Sisyphus-like striving, rather than the physical toil. Woman was another of the sculptor’s major themes —— woman as a symbol of beauty, sensuality and exhilarating youth, which is evoked by extreme simplification of volume and rounded shaping of the lines. Jindřich Wielgus produced numerous uncommissioned architectonic sculptures such as the sculptural group Late Afternoon II at Ostrava–Poruba, or the sculpture Eve in the spa park at Darkov.

A sculptor and graphic artist, Wielgus trained as a carver and attended the Brno school of arts and crafts. From 1931 he studied at the Prague School of Applied Arts in the studio of Karel Dvořák and in the period 1934−1937 he attended Otakar Španiel’s seminar at the Prague Academy of Fine Arts. From 1937 to 1938 he studied at the Accademia di belle arti in Rome as a scholarship student. He was born into a mining family who lived on a worker’s housing estate in Karviná. That environment was reflected in Wielgus’s oeuvre and the social aspects of the Ostrava region interested him in particular. He created a series of uncommissioned sculptures particularly between the years 1944−1947 on the theme of work in the steelworks and mines and life on the workers’ housing estates —— Homecoming, Miner at Work, and others.