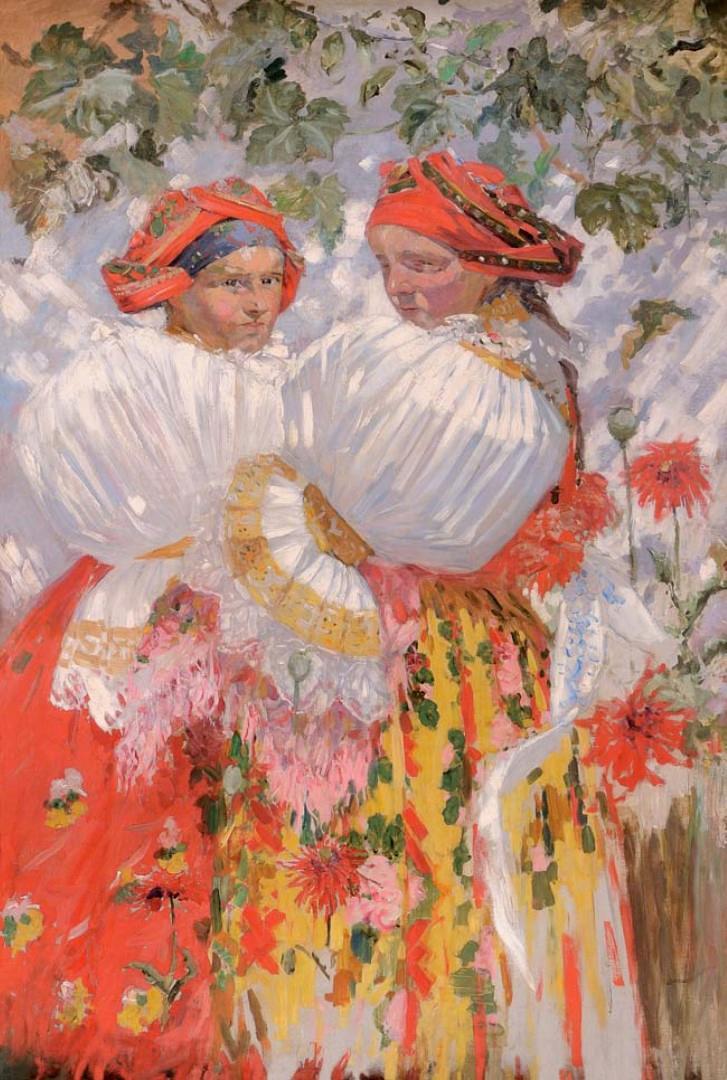 The painting Girls among Flowers is from the end of the crowning period of Uprka’s oeuvre. His efforts at creating monumental figural compositions magnificently show their fruits here. The girls in folk costume are depicted at a moment when the sunlight is at is most intense. Ornamentalised composition and the use of bright and radiant colours are moving in the direction of Expressionism and Abstraction. The idealisation that enabled that shift in the painter’s assessment of the visible was the decisive criterion. He was assisted by the striking motif of the folk costume with its dominant red colour —— unacceptable in Czech painting —— which pervades the poppy flowers. This spontaneous effort to create a monumental impressionist effect that depends on the highly colourful vision of his ethnically distinctive native region, sets it among the highest achievements of end-of-century painting and renders it comparable to French models. During the 1920s and ’30s, a less significant period in the artist’s output, he lived in Slovakia. His later development led to a certain schematisation and a decline in quality, as a result of which, and also due to the resurgent aversion to folkloric inspiration, there has been a tendency to undervalue the supreme achievements of his oeuvre.

From 1881 Joža Uprka studied at the Academy of Fine Arts in Prague under František Čermák and Antonín Lhota, then from 1884 at the Akademie der Bildenden Künste in Munich under Otto Seitz, and once more at the Academy of Fine Arts in Prague with Maxmilián Pirner. After his studies he returned to his native Moravian Slovakia where he painted the everyday and celebratory moments of the lives of the local people. His palette became brighter under the influence of Munich colourism and French Impressionism, as well as the of the richly lavish colours of Moravian Slovak folk art. Through Impression he was able to marry Czech art with contemporary French influences.