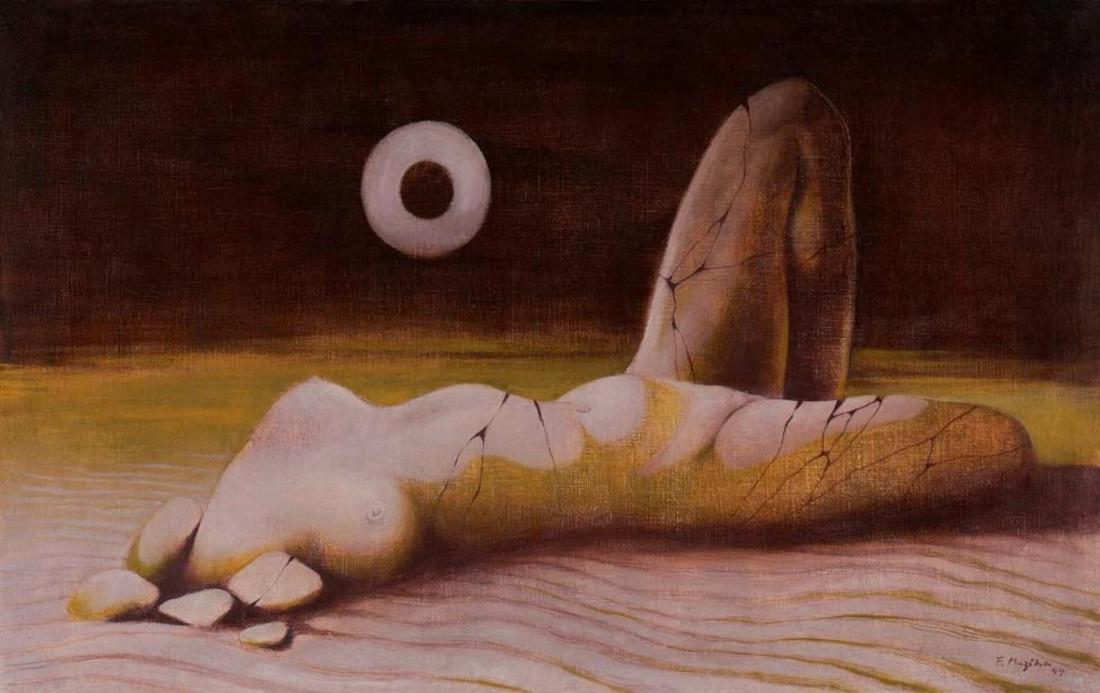 During the Nazi-occupation in World War II he painted a series of paintings in which he addressed the issue of the threat to the nation through enigmatic dreamlike scenes. At the time he was banned from exhibiting and his oeuvre was labelled Entartete Kunst (degenerate art). Those works include the canvas From the Bohemian Paradise V (Recumbent Torso). The painting’s leitmotiv is a recumbent female figure, whose curves decompose into the shape of rock formations. The sense of threat and subsequent ruin is sublimated here into the landscape by means of the magic atmosphere created not only by the unique use of colour but also by the use of specific light in the picture area.

From 1918 to 1924 Muzika attended the Prague Academy of Fine Arts where his teachers were Jakub Obrovský, Karl Krattner and Jan Štursa. He then continued his studied in Paris. His name was linked with several artists’ associations: with Devětsil in 1921 and subsequently with the Mánes association and finally with Nová skupina. He took part in the ground-breaking exhibition Poezie 32 at Prague’s Mánes Gallery at which many foreign artists showed their works, and which played a fundamental role in the further development of the Czech art scene. A key year for that painter, illustrator and typographer was 1927, when he met the publisher Otakar Štorch–Marien and became the artistic director of the Aventinum publishing house and editor of the magazine Musaion. He also played a major role in the history of Czech stage design, designing over forty sets for the National Theatre in Prague between 1927 and 1947. Over the years Muzika’s oeuvre evolved from its initial Fauvism, via magic realism, lyrical and then imaginative cubism to the organic expressionism of the late sixties and early seventies.