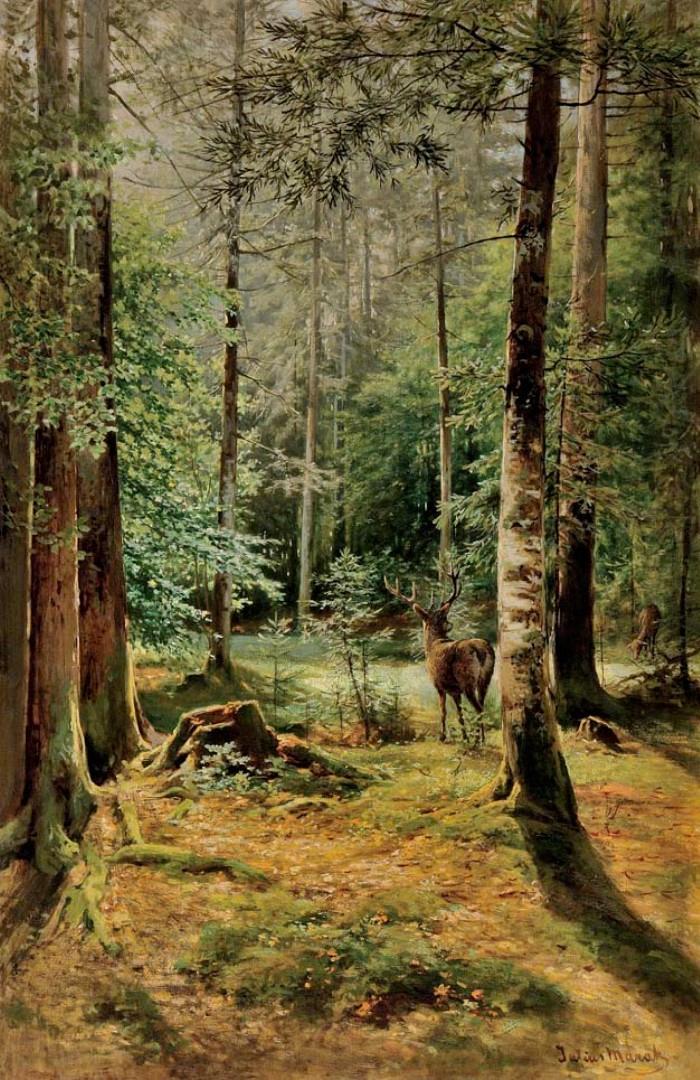 Typical of his oeuvre and of the works of his pupils, such as František Kaván, Antonín Slavíček, Alois Kalvoda, Otakar Lebeda and Jaroslav Panuška, were depictions of secluded woodland scenes with changing atmospheric conditions at different times of day and seasons of the year. It was a record of reality and mood that was typical of the work of the Impressionists. Evidence of that is the painting Forest Interior with Deer. The work was preceded by many charcoal preparatory sketches done by Mařák outdoors. Mařák’s choice of colours were chiefly in the range of earthy browns, ochres and greens, to which light and shade lend plasticity. Mařák belonged to the classicist generation whose focus of attention was the human figure while the scenery or landscape were worked on subsequently. In his later paintings the brush- work becomes freer and in many ways they are forerunners of the impressionist art of his pupils, who would adopt a different procedure in their works. Slavíček and Lebeda, for instance, maintained that a picture of a landscape is determined by an atmosphere — an ‘impression’ in other words — and not by a detailed description.

One of the most important Czech landscape artists of the second half of the 19th century, Mařák first studied landscape painting at he Academy of Fine Arts in Prague under Professor Max Haushofer. He then moved to Munich and Vienna where he mastered etching technique. In 1882 he was commissioned by the benefactor Josef Hlávka to decorate the salons of the National Theatre, where he helped depict famous sites from Czech history, such as Říp, Blaník and Vyšehrad, which were the source of the foundation stones for the new theatre. From 1887 he taught at the Academy of Fine Arts in Prague, were he ran the school of land-scape painting according his own specific style of painting.