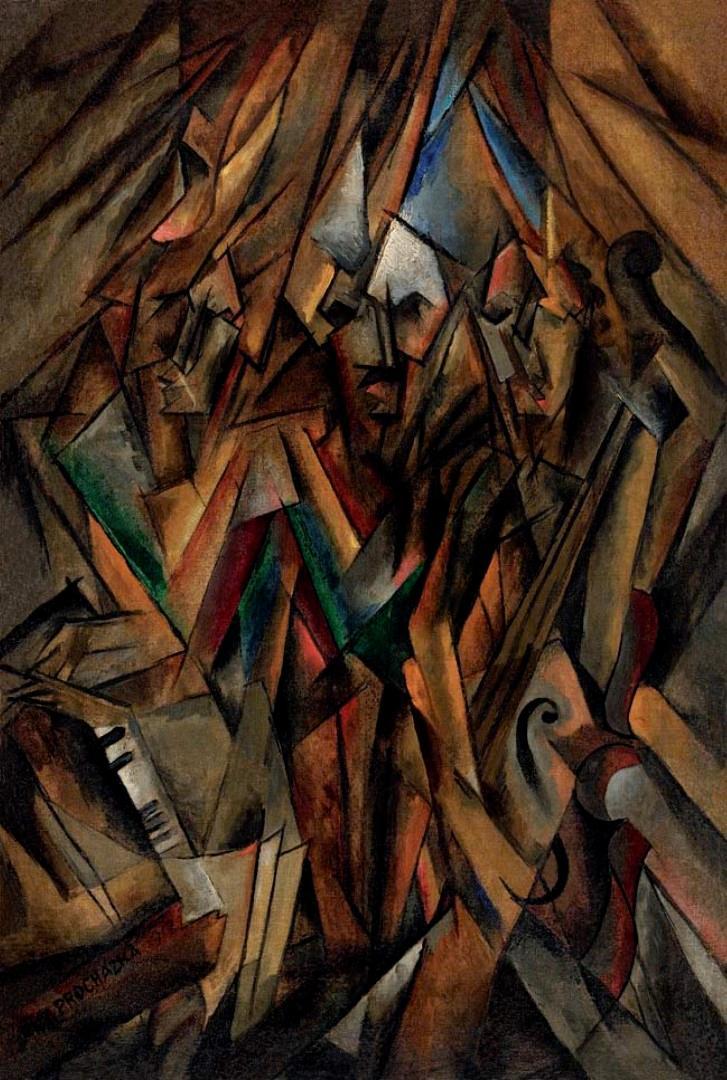 During his stay in Ostrava there was a shift in his oeuvre from Expressionism to radical Cubism. The change was triggered by exhibitions of the Mánes and SVU artists’ groups, of which he was a member. The paintings that emerged from Procházka’s studio were among the most progressive of his day and ranked alongside the works of innovators such as Emil Filla or Bohumil Kubišta. Evidence of this is the painting entitled Concert. The surface of the vertically-oriented canvas is divided up into crystalline matter that allows the viewer to suspect that they are looking into the faces of three musicians. By the way it is conceived the painting evinces an enormous timelessness that is typical for the later phase of his oeuvre, which would be a unique orphism is terms of colour, linking visual art with music and poetry.

Procházka commenced his art studies at the School of Applied Arts in Prague and then at the Prague Academy of Fine Arts (1907−1908) under Emanuel Dítě and Hanuš Schwaiger, but he did not complete the course. As in the case of other members of the Osma group, Procházka’s oeuvre in the first decade of the 20th century was chiefly influenced by Express- ionism and the paintings of Edvard Munch. Procházka exhibited with Osma in 1907 and 1908, and his wife Linka (née Scheithauerová) also took part in the second exhibition. In spite of his considerable talent and the fact that his work displayed progressive tendencies, he was obliged to take a post of substitute teacher of calligraphy, geometry and drawing at the Provincial High School at Moravská Ostrava. Although he regarded the appointment as temporary, he remained until 1921, when he transferred to Nové Město na Moravě and then to Brno.